Read others reviews at Amazon:

What the Kit Contains

The droid kit contains over 30 pieces that your little programmer will put together to create a realistic looking R2-D2,  including:

The droid body is clear plastic and contains stickers that you can use to customize what its appearance.

The step-by-step instructions are 3-D videos that make it easy to assemble. In order to control the robot, kids also need to download an app (compatible with both Apple and Android devices). 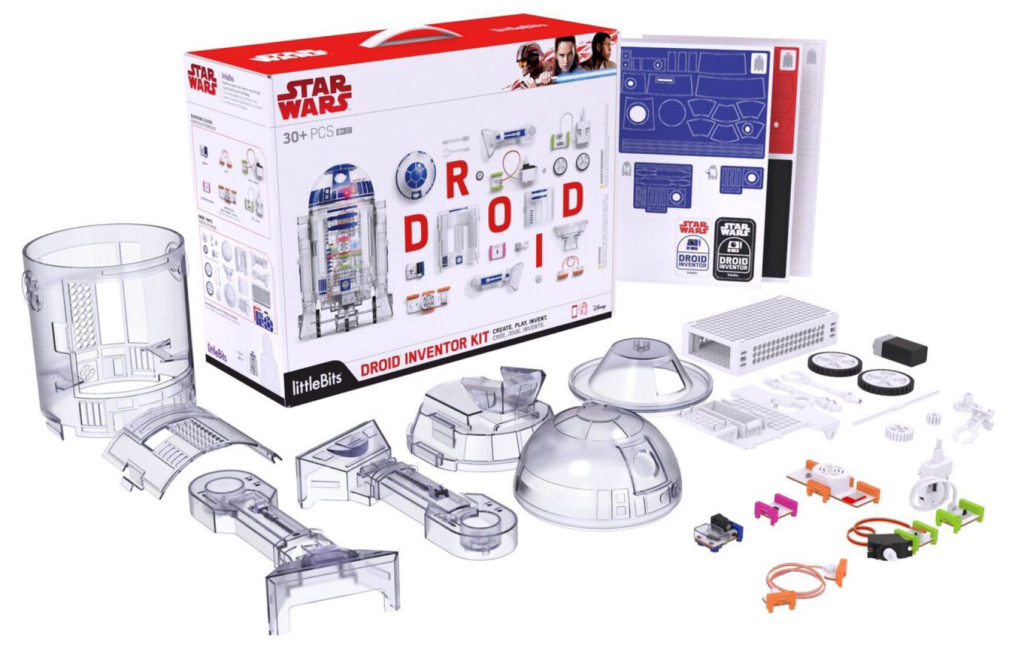 How the Droid Kit Works

The robot is preprogrammed in the sense that you cannot write your own programs to it. However, the 16 in-app “missions” performed can customize the Droid and teach it to perform new tasks. There are four “training missions” which walk you through configuring the robot. Then there are several missions for configuring the robot, including attaching stickers to the robot and recording your voice so it can play it back on command. As you move onto the next level, you complete slightly more advanced activities. The robot can be driven using the app and it also performs various activities using proximity detection, such as using the Force and getting the robot to turn its head. The robot can also be used in a self-detection mode where it can drive around obstacles. In total, there are four different levels.

There’s no denying that this robot is exceptionally cool for those who love Star Wars; it looks like a realistic R2-D2 and plays the classic Star Wars theme song. The robot itself is made of sturdy, heavy-duty plastic and is easy to program. Kids should be able to put this together under 2 hours, or potentially under 1 hour if they’re older. Once the Droid is assembled, it looks like a pretty convincing R2-D2. The robot can also be customized using everyday household objects to transform it into other types of Droids.

The app, on the other hand, has received slightly more criticism for the lack of personalizable coding. Beyond the 16 included missions, there isn’t much else to do with the bot. And part of the problem lies with the missions. On paper, 16 sounds like a lot, but once those missions are exhausted, kids might get bored. On the other hand, kids might enjoy doing the same missions over and over again; after all, it’s advertised for kids ages 8 and up, so it doesn’t need to be unnecessarily complex.

Plus, the missions are fairly interesting, and let’s face it: Getting to use the Force on a robot sounds pretty alluring.

While the missions may be a bit lacking in some respects, assembling the kits itself is fun and teaches kids a lot about building a robot. They’ll learn not only how to assemble it, but also why each piece of the kit is important, between the 9 volt battery and DC motor to the control hub and sensors.

Starting some activities require that the robot be disassembled and then reassembled, which some kids might get bored of after a while, and it could become tedious for adult helpers, too. Additionally, because of this, you must frequently watch the instructional videos on the app with no real way to skip ahead if it’s already assembled. While the kit is supremely fun, ease of access can occasionally be difficult.

Additionally, the robot can only be powered using the app from a phone or tablet — no external controller is provided. For younger kids without a phone or tablet who would need to borrow their parent’s phone, this could prove to be an issue if Mom or Dad don’t want to give up their phone for hours at a time (and with as much fun as kids have with this kit, it will be for hours at a time.)

While we do have some criticisms with this kit, they’re about fairly specific details that most people might not even find to be an issue. Overall, the kit offers a lot of learning and fun for kids, especially ones who just want the basics of building a robot and who appreciate Star Wars. They’ll enjoy how realistic R2-D2 is and love taking it on a variety of missions. For the price, it offers a lot of options and activities for kids to implement. Along with instructional videos that make it especially easy for kids to piece together the kit, this is a great value for kids who want something fun and easy to work on. 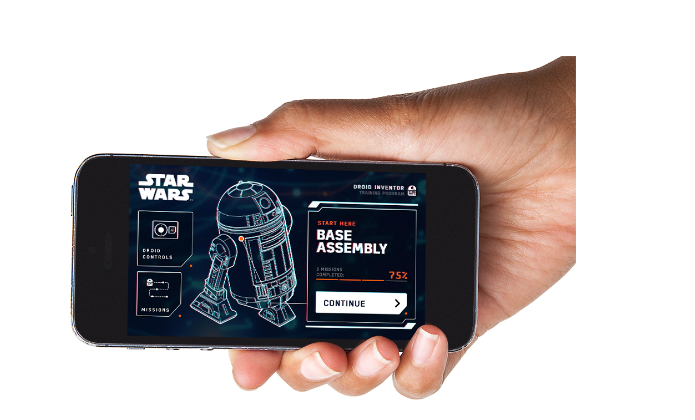 The Star Wars Droid Inventor Kit is well worth its price tag. It’s high quality and includes a number of fun activities for kids to perform and teaches them all about the mechanics behind robots.

Some criticism of the kit has involved the lack of personalization available to code the robot, but each activity is fun and teaches kids something new about how a robot functions, so while it could perhaps use more personalization, it includes plenty of functionality as-is. We also wish a regular controller came with this robot for if a kid doesn’t have a phone or tablet and the parents don’t wish to give up their phone for hours while their child plays with the bot.

But for what the robot offers and the quality of it, we highly recommend it. It’s without a doubt the best Star Wars robot of the year. We recommend this robot if your kid enjoys Star Wars and wants to learn more about how a robot works. Who doesn’t want to use the Force to power a robot?

Other than the big A, several parent bloggers have discussed the kit on their site: FairyTaleTraveler, PlayPartyPlan, and LovePeaceAndTinyFeet.

You can also check out our list of best robot kits–which includes this one!–from 2016 and 2017.

www.learningtostem.com is a participant in the Amazon Services LLC Associates Program, an affiliate advertising program designed to provide a means for sites to earn advertising fees by advertising and linking to Amazon.com.

https://www.learningtostem.com/ is a participant in the Amazon Services LLC Associates Program, an affiliate advertising program designed to provide a means for sites to earn advertising fees by advertising and linking to Amazon.com.